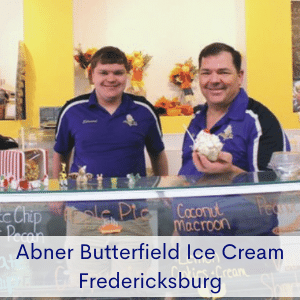 Ed Wright, owner of Abner Butterfield Ice Cream, is a man of many names — “King Bee” and “Director of Scoopology” to name a few. This retired Air Force veteran loves ice cream. His passion for the stuff stretches back to boyhood trips to his grandma’s house with his brother, where a beloved soft-serve ice cream stand always signaled the journey’s end.

Ed began experimenting with creating his own flavors at an office party. They proved successful, but Ed didn’t make the entrepreneurial connection until later, when he reached out to the University of Mary Washington SBDC. “I didn’t give it a lot of serious thought until 2011, when I suddenly found myself looking for equipment and planning the ‘how to’ of an ice cream business,” says Ed. “I found some used equipment from a local shop that had gone out of business and built our first plant. In 2012, I bought a used fleet truck and converted it for scooping ice cream.” Affectionately referred to as the Purple Cow, the truck is a 27-foot ice cream shop on wheels that goes to farmers markets and other events.

“We started out as ‘Abner Butterfield Ice Cream’ in 2012 in two farmers markets and quickly added a third. We also started to pick up catering events. By the 2015 season, we built our second plant and continued with more farmers markets and events. During the 2018 season, we started pursuing the ‘Abner B’s’ shop opportunity,” explains Ed.

The SBDC has been beside Ed throughout this journey. After he first reached out to them in 2011, they continued to be a resource and sounding board throughout the years. “Having been a planner of one sort or another pretty much my entire Air Force career, planning is one of my best skill sets. However, planning is always informed by experience. The SBDC provided that specialized insight through its experiences with a lot of different kinds of businesses. They provided feedback that I myself could not bring to the table,” Ed explains. “They also reviewed my plans and ideas and validated that I was on the right track on various aspects of the projects I sought assistance on,” he adds.

The SBDC provided Ed with vital statistics to help him understand his market. “The research data that helped gauge the local market so I could get an idea of the range of business possibilities has been very helpful,” explains Ed. “They have also provided some really good stats on my industry, so that I have some good comparison points for business performance.” Ed used the SBDC’s insights when moving into his new brick-and-mortar shop.

Insights and analytics aside, Ed’s definition of success is simple and sweet. “In eight years, we’ve done over 200 flavor combinations— nearly 60 new ones since we opened the shop,” Ed says. “Customers often have trouble deciding which flavors to get. The flavors are just too good to decide between. I tell them that that is success for me.”