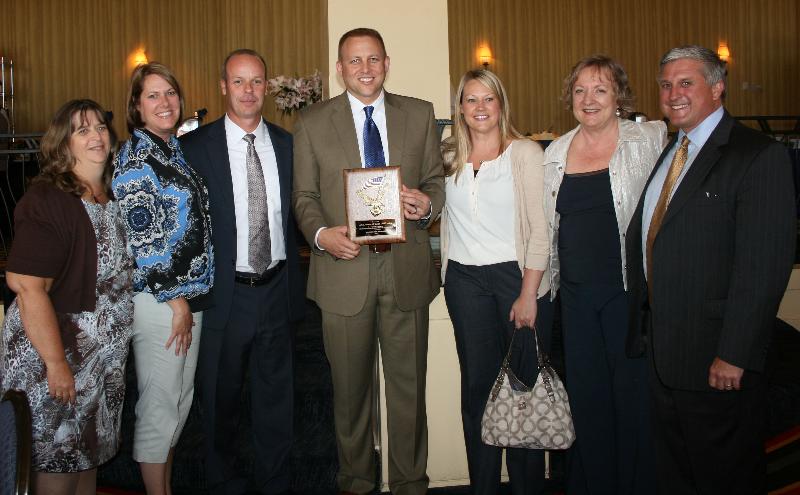 Lt. Col. Thomas E. Keogh (USMC retired), owner of Corps Solutions in Stafford, VA, was honored as the 2012 Virginia Small Business Veteran of the Year. A highly decorated Marine officer, he retired in 2009 to start Corps Solutions to provides training and educational services to the Department of Defense.

Within three years, there were 35 employees, a 252% growth rate, almost no turnover in staff, and incredibly high customer satisfaction rates. Corps Solutions hires mostly Marine veterans and keeps them employed by keeping teams together even when contracts end.

He would rather carry people from month to month and reduce profit margins, Keogh explained, than lose talent and cause undue burdens on employee and their families. In addition he is a supporter of Toys for Tots, the Fredericksburg Area Food Bank, the Wounded Warrior Project, in addition to coaching youth soccer and baseball.

Each year, Virginia's 29 SBDCs each select a veteran small-business owner or entrepreneur from their local service areas, and the winners then compete for Virginia's Small Business Veteran of the Year Award. The State winner receives a plaque from Virginia SBDC, and their name is inscribed on the award urn, which is permanently displayed at the Virginia War Memorial in Richmond, Virginia.

Debra Hamilton Farley, Associate Executive Director and Certified Business Analyst, has been selected as the Virginia SBDC Network’s State Star for 2013. This annual award, conferred by the National Association of SBDCs, recognizes an exemplary performer who makes significant contributions to their SBDC network and who demonstrates a strong commitment to small businesses. In the Virginia SBDC Network, staff members from the 29 statewide offices nominated and then voted for the award recipient.

On June 4, Jody Keenan, State Director of the Virginia SBDC Network, presented Farley with the award at a reception held in Norfolk. Keenan said, "Debra’s clients sing her praises, her partners rely on her efforts for their success, and her peers and colleagues selected her as the most worthy recipient of this national award. She truly reflects the State Star criteria.”

Debra Farley has worked for the SBDC for 23 years. She assists clients who desire to start a new business and/or who need assistance in further developing an existing business. Farley received an Associate Degree in Business Administration from Thomas Nelson Community College; a Bachelor of Science Degree in Business Management from Hampton University and she completed a Masters’ Program in Global Management, from Cambridge College, Cambridge, Mass.

During her tenure with the SBDC, Farley was instrumental in the center’s participation in the Welfare to Work Federal Program; the initiation of the Small and Minority Business Series, a three to five week training program developed on the Peninsula to provide a systematic selection of training suitable for the start-up and/or existing business professional. Many attendees have referred to this setting as a “mini MBA.” She also created group training for non-profit church groups and opportunities for individual minority business owners to advertise their home-based business ventures during a weekend training session and breakfast setting. Farley collaborated and offered a custom-designed class for the City of Hampton’s Redevelopment and Housing Authority to assist a select group of low-medium income participants in starting a business in 2010, 2012 and 2013.

Farley received the Minority Business Advocate of the Year Award by the Virginia Peninsula Chamber of Commerce in 2004, and was honored by Inside Business in 2007 with its Women in Business Achievement Award.

Born and raised in Macon, GA, Farley currently resides in Hampton, VA, where she has lived the past 23 years. She is married to Tommie Farley, Jr., and they have three daughters and two granddaughters. Debra volunteers her time as an active member of Saint Paul A.M.E. Church, where she serves as one of 19 Stewards; Executive Assistant to the Pastor; Mass Choir Member; Missionary Society Member; VP Pastor’s Aide Organization; and Director, Junior Church Programs.

The luncheon, “Stand Up for Small Business,” begins with a networking reception at 11:00 a.m., followed by the luncheon and program at noon. Paula Otto, executive director of the Virginia Lottery, will serve as mistress of ceremonies for the event. Registration will open in mid-May at a cost of $40 per person. The Westin Richmond Hotel is located at 6631 West Broad Street, Richmond, VA 23230.

The 2013 Award of Excellence for Organizational Development was presented by the Virginia Downtown Development Association to the Virginia SBDC for its Small Town and Merchants Program (STAMP).

"This is a true honor to have one of our State projects recognized by the organization that advocates, supports, and promotes leadership in downtown revitalization throughout the Commonwealth," said Jody Keenan, State Director of the Virginia SBDC.  "Not only is STAMP a great program but it actually has had a very positive impact on the retailers and restaurateurs who have participated.  Year-over-year revenues have increased by as much as 65% as a result of the advice given."

Marc Willson, Retail Consultant to the Virginia SBDC, was delivering a STAMP in Winchester on the day of the luncheon, but he said, "With today's retail industry changing as quickly as it is, keeping abreast of the new technologies and customer expectations is vital to retailers' very existence.  I am really glad we can do our part."

VDDA brings attention to the significance of historic downtowns to Virginia's economic vitality and to enhance the effectiveness of organizations, individuals, and communities to foster vibrant economic development.

The Virginia SBDC Network (www.VirginiaSBDC.org) is an organization of 29 local SBDCs across Virginia.  We are the most extensive business development program in the Commonwealth, providing free professional business counseling, low-cost training, and information resources to help grow and strengthen Virginia businesses.

The SBA launched www.sba.gov/healthcare, a new health care web page that will help individuals and small business owners understand what the Affordable Care Act means for them. The new tools will serve as a gateway for small business owners connecting them with information provided by SBA’s federal partners responsible for implementing the law, including the U.S. Department of Health and Human Services (HHS).

With the new year comes a new look for Virginia SBDC: new logo, new website, new programs, and new videos about ourselves and our success stories. Yet we still offer the same quality of service you can rely on to help you plan, act, and succeed with your small business.

New Passport for Global Markets programs will be given in 2013 in Fairfax, Norfolk, and Roanoke. Get an updated schedule and application here.

Based on the National Science Foundation’s I-Corps™ program for Lean Startups, ICAP helps inventors and entrepreneurs take the right first steps in bringing new technologies and innovations to market.

To learn more about hosting an ICAP cohort or becoming a partner, click here.