Water and air: Finding success with the basics 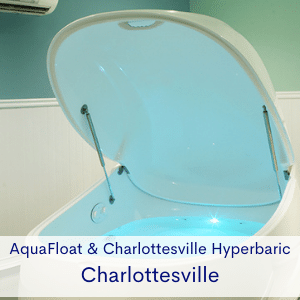 Ted O’Neill and Jordan Kristian launched AquaFloat in October 2014. Ted had been a practicing pharmacist for almost 23 years before he discovered float therapy for sensory deprivation. He was intrigued by the seemingly endless application of the treatment, which involves floating in highly salinated water in a completely dark tank. Since floatation therapy was a rapidly expanding market, Ted wanted to explore the business opportunities. He knew that Charlottesville would be an ideal place to launch his new business.

A fellow business owner connected Ted with Betty Hoge, Director of the Central Virginia (CV) SBDC, who charted a tailored plan of action for Ted that proved successful. “Hearing Betty’s objective suggestions and advice were very much welcomed. I spent one or two sessions with her providing the details about AquaFloat — its history, current status, and my vision for the future,” Ted explains. “She began collaborating with me to achieve the goals I had set.”

AquaFloat opened to an enthusiastic welcome from the Charlottesville market. In the past six years, the business, which also offers specialty massage and infrared sauna sessions, has grown, thanks in part to collaborating with Betty. Between 2018 and 2019, AquaFloat saw an approximate 20% increase in sales, thanks to the partnership with the CV SBDC.

As AquaFloat thrived, Ted turned to Betty for assistance with a second closely entwined business endeavor, Charlottesville HyperBaric. This facility will focus on hyperbaric oxygen therapy, which research shows works as a primary or complementary therapy for autism, strokes, PTSD, enhanced wound healing, pre- and post-surgery recovery, and more than 40 common conditions.

Once again, Betty readily assisted Ted with the “humongous” business plan for the sister company. “I made Betty aware of CHB early in our relationship but didn’t begin working on a business plan until 2018,” Ted says. “Betty was essential to the creation of the business plan for Charlottesville HyperBaric. She coached me on its structure, syntax, and necessary financials. After a lengthy process, we are excited to announce a March 2020 launch date.”

According to Ted, Betty has been the key to Charlottesville HyperBaric’s successful materialization. The business received a $300,000 SBA 7(a) loan through BB&T Bank in October 2019. Ted feels Betty’s coaching gave the team greater credibility with the bank because of the long-standing relationship between BB&T and the CV SBDC.

“This would never have happened without her help,” Ted says. “Betty is an unbelievably competent and enthusiastic supporter of small business. She has helped me beyond measure.”