No bull about it: Paladin Bar & Grill bucks into town 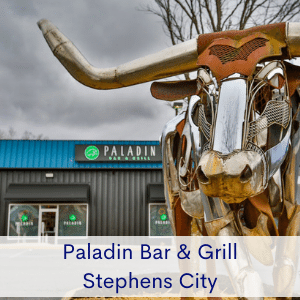 It definitely wasn’t their first rodeo, but Craig Spaulding and William Waybourn, owners of Paladin Bar & Grill in Stephens City, decided to embrace the wild west spirit all the same.

A massive 1,100-pound bull named Paladin dominates the front entrance to Paladin Bar & Grill. The statue, created by Bettye Hamblen Turner, is constructed from stainless and carbon steel and recycled motorcycle and car parts. “Paladin was created on the LBJ Ranch in Texas and is one of five Longhorn sculptures. This one was the fifth in the series and the only one on public viewing, as the other four are in private collections,” William explains. The eatery’s namesake has been bullish about pulling in curious patrons and photo-op hungry passersby since opening its doors in March of 2018.

Craig and William are no strangers to entrepreneurship. They own Long View Gallery in D.C., the largest private gallery in the capital city, as well as Screen Archives, a massive online film-and-music distributor. When it came to the always-fickle restaurant scene, Craig and William were glad to have the assistance of the Lord Fairfax SBDC and seasoned analyst, Christine Kriz.

“Early on Christine gave us a demographic overlay of the area that was instrumental in our decision to sign the lease. She also provided us with resources of various governmental entities and private businesses to help us get oriented and in business,” William says. “We never would have opened this location had it not been for the SBDC and Christine Kriz. Her assistance and data were invaluable in making a determination to open Paladin Bar & Grill in Stephens City,” William adds.

For Craig and William, the restaurant incorporates pieces from all their ventures. “We try to make all of our companies partner with each other,” William says, “hence the artwork and restored movie posters you see everywhere around Paladin.”

Despite its neighborhood setting, the investment is paying off with continued steady business and growth. “We just recently started paying our servers above minimum wage — that’s unheard of in the restaurant industry,” says William. “Most servers barely survive on tips, so we made the decision to increase their hourly pay in anticipation that customers would agree that better service deserves a higher tip,” he adds.

While Paladin, the bold chrome bull, continues to be the talk of the town, William and Craig are looking to the future, once again with the assistance and resources of the SBDC. “We are currently working with the Lord Fairfax SBDC and Christine on another location in northern Frederick County,” says William. 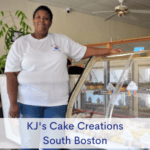 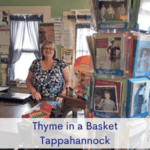